By Tutanjam - January 28, 2020
Dharamshala is the winter capital of Himachal Pradesh. It is the headquarters of Kangra district of Himachal Pradesh, and is located at a distance of 16 km from Kangra city. The McLeod ganj suburb of Dharamshala houses the headquarters of the Central Tibetan Administration, and is therefore the residence of the Dalai Lama and the capital of the exiled Tibetan government. Dharamshala has also been selected as one of the hundred Indian cities to be developed as a smart city under the Smart Cities Mission of the Government of India. Before the arrival of the British in Kangra region, Dharamshala and its surrounding areas were ruled by the Katoch dynasty for two millennia. After the treaty of the volcano between Katoch and Maharaja Ranjit Singh of Sikh dynasty in 1810, Katoch Raja Sansar Singh remained local vassal only in Kangra region. The region was captured by the British in 1848. In 1849 a place was selected for a military cantonment inside Kangra district on the slopes of Dhauladhar mountain, where a Hindu Dharamshala was located.The charming snow-clad peaks of the Himalayas, lush green fields, greenery and natural beauty all around, fascinate tourists. As far as can be seen, the high peaks of the Himalayan mountain range and the high melting snow mark on them, the pine standing on the rocks and the green pine trees are seen to attract anyone's mind. At night or in the morning and evening, due to the cool breeze, the body is very relaxed. 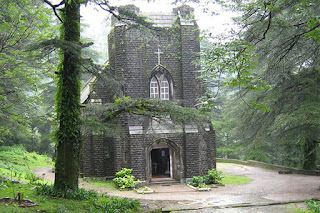 St. John's Church was built in memory of 'Lord Elgin'. Which is one of the sightseeing places in Dharamshala. This church is made of stones and attracts tourists from far away.
Timings: Monday - Saturday: 7:00 AM - 6:30 PM
Sunday: 9:00 AM - 6:30 PM 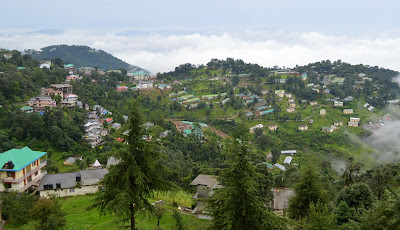 There are many Tibetan settlements in McLeodganj Dharamshala. Where Tibetan artifacts, handicrafts and many items of Tibetan style are sold. The statue of Mahatma Buddha is also visible in McLeodganj. If you are interested in trekking then this place is perfect for you. 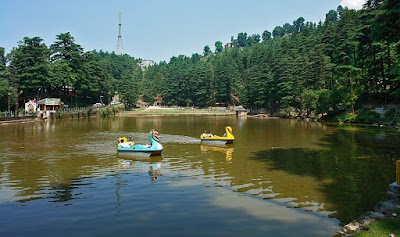 Dal Lake attracts saliners from far away where the beauty of 'fur' trees adds to the beauty of this lake. The lake is surrounded by lush green forests of cedar, Dal Lake is famous for its beauty and pilgrimage center. The area around Dal Lake is a natural paradise. The area of the lake is around one hectare (ie 10,000 square meters). A famous Lord Shiva temple is situated on the banks of Dal Lake, which is considered very sacred and is 200 years old. According to a legend, a sage named Durvasa worshiped Lord Shiva here.

Dharamkot is one of the major sightseeing places in Dharamshala where tourists visit the place throughout the year. The panoramic view here brings coolness to the eyes.

15 km from Chamunda Devi Temple Dharamshala Located at that distance. This temple of Maa Chamunda is about 700 years old, which is located in the dense forests and near the Baner river. This huge temple has special religious significance, which is one of 51 Shakti Peeth. This temple is dedicated to the Hindu goddess Chamunda, whose other name is also Goddess Durga. It is believed that the stage of Mata Sati was dropped at this place and Mata was established here as Shaktipeeth. Chamunda Devi Temple is the place of Lord Shiva and Shakti. There is a belief among devotees that listening and reciting the 'Shatchandi' text here is paramount and all the troubles of the listener and the listener are eliminated.On the back side of the Chamunda Devi Temple is the Ayurvedic Clinic, Library and Sanskrit College. Medical supplies are provided to the devotees by the staff of the hospital. In addition to the mythological books in the library located here, books related to astrologers, Vedas, Puranas, cultures are available for sale. These books can be purchased at a reasonable price. The cultural college located here is run by the institution of the temple. Here the Vedas, the Puranas, the free classes are run.
Timings: Summer: 5:00 AM - 10:00 PM
Winter: 6:00 AM - 9:00 PM 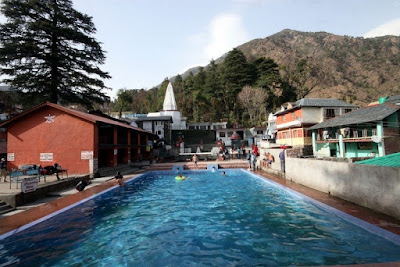 Bhagasunath is a waterfall, which attracts tourists with its panoramic views. Here is an ancient temple of Bhagusunath.

Triund is a very exciting picnic spot. You can celebrate picnics here with your friends in the lap of the hour. 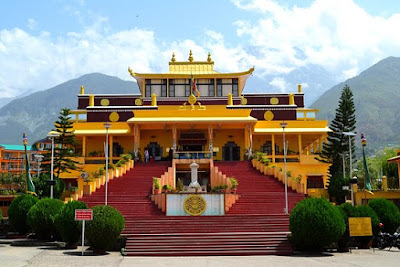 Like the Jokhang Temple in Lhasa, the Tsuglagakhang Temple also has golden statues of Sakamuni Buddha, Avalokiteshvara and Padmasambhava. There is also a library and museum inside the complex. The atmosphere and surroundings are very quiet here.
Timings: 8:00 AM - 8:00 PM
Museum Timings- 9:00 AM - 5:00 PM
Closed on Mondays 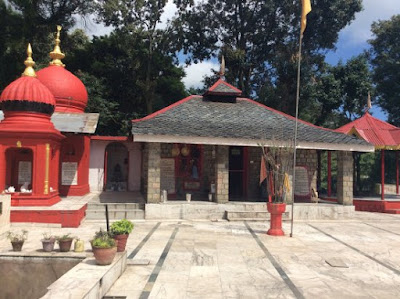 Surrounded by forests and mountains, this temple is located near the village of Khanyara. A small stream flows near it. It is said that when Arjuna was on his way to Mount Kailash, Lord Shiva appeared here before him and blessed him with victory over the Kauravas.
Timings: 5:00 AM - 9:00 PM 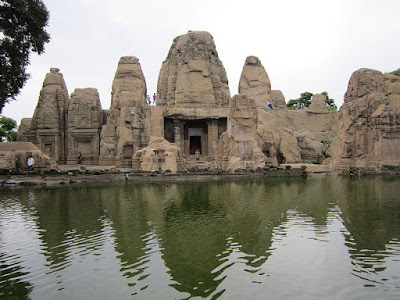 This 8th century rock cut temple dedicated to Hinduism gods Shiva, Vishnu, Goddess and Solar traditions is made of Nagara style architecture including a sacred lake. This is a demonstration of intelligent design. 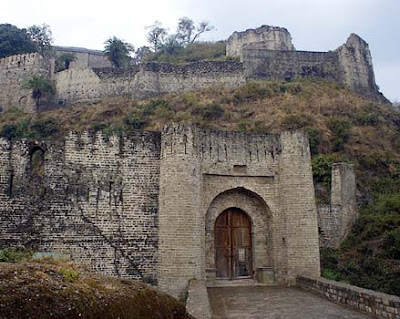 Built by the royal Rajput family of the Katoch dynasty, this fort is one of the oldest forts in India and the largest fort in the Himalayas. Other attractions around the fort are Ahani and Amiri Darwaza, Darsani Darwaza, Lakshmi-Narayan and Ambika Devi Temple. 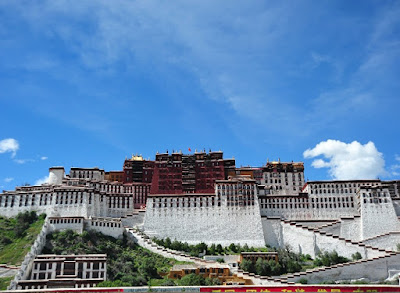 This monastery was founded around 1565 by Gendun Gyatso in the second Dalai Lama Lansa. The vote shifted to Dharamshala after the 1959 Tibet uprising and has remained there since. The monastery has more than 200 monks representing four Tibetan monastic lineages. 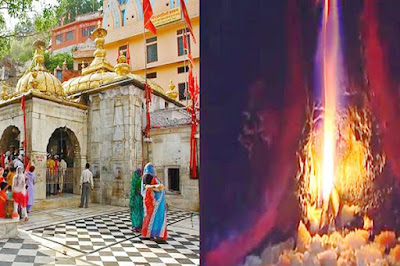 King Bhumchand Katoch of Kangra had dreamed of this holy place and then built a temple here. The temple is dedicated to the burning face of the Goddess - called Jwalamukhi and the flame is worshiped here instead of the idol of the mother. This temple is a Shakti Peetha surrounded by quiet hills as the tongue of Goddess Sati fell here. 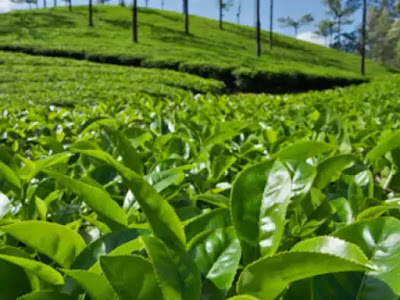 The green tea plantations of Dharamshala are the main center of tourist attraction. You can also stop here for pictures and relax for some time and buy tea to take home. 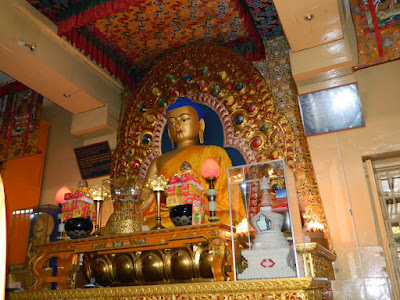 The de facto Gyuto Monastery was established in Tibet in 1474. The great saint and scholar from the last Buddhist lineage, Tsongkhapa who belonged to the Jailam 6 lineage, who developed tantric education in various monasteries. This monastery of Dharamshala was started by the same scholar for tantric practice, ritual and Buddhist philosophy. 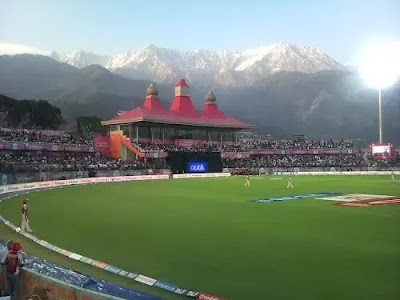 This cricket stadium, situated at an altitude of 1,457 meters above sea level, is the only high altitude stadium in the world, with beautiful snow-capped peaks in the backdrop that seem to merge into the colors of the stadium. A visit to this stadium must be in every tourist's itinerary.


HOW TO REACH DHARAMSHALA

Tourists traveling to Dharamshala by road can avail comfortable bus facility to reach this destination. This place is connected to neighboring cities by regular bus service. Luxury buses are also available from Delhi to Dharamshala, whose fare is around Rs 1600  per person. 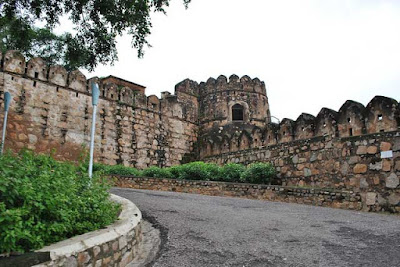