By Tutanjam - May 09, 2020
The Trimbakeshwar Jyotirlinga temple is in the Nashik district of Maharashtra-Province, the origin of the Godavari River from the nearby Brahm Giri mountain. There is also great glory of Trimbakeshwar-God, located near the place of origin of these Punyatoya Godavari, as per the request of Gautama Rishi and Godavari, Lord Shiva was pleased to live in this place and became famous by the name Trimbakeshwar. Inside the temple, there are three small lingas in a small pit, Brahma, Vishnu and Shiva - are considered symbols of these three gods. According to Shivpuran, there are seven hundred steps wide to reach the top of Brahmagiri mountain. After climbing these stairs 'Ramkund' and 'Lashmankund' meet and upon reaching the summit, there is a vision of Bhagwati Godavari emanating from Gomukh. 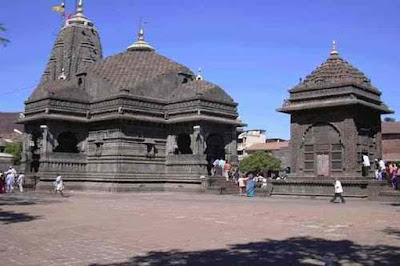 According to legends, there was a famine in Trimbakeshwar that lasted for twenty-four years. Due to this, people started starving. However, God of Rains Varuna was pleased with the sage Gautama and therefore used to rain daily only in his ashram in Trimbakeshwar. Due to the famine, the sages took refuge in their ashram. With the blessings of the sages, Gautama's merit began to increase while Lord Indra's fame began to decrease. As a result, Indra ended the famine and caused the entire village to rain. Nevertheless, Gautama continued to feed the sages and continued to increase his virtue. 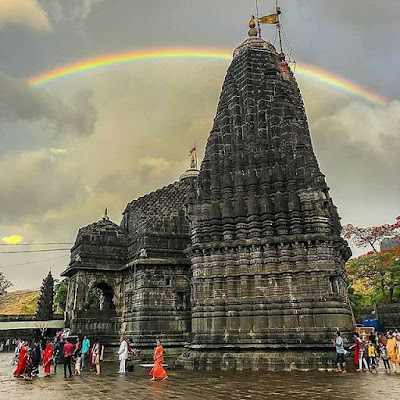 Once, a cow came to their farm and grazed on the crop. This angered Gautam and he threw Darbha (sharp grass) over the cow. Due to which the cow died. In fact, she was Jaya, a friend of Goddess Parvati. Hearing this news, all the sages refused to dine at Gautama's ashram. Gautama realized his foolishness and asked the sages how to make forgiveness. The sages then advised him to bathe in the Ganges. Gautama went to the summit of Brahmagiri (Brahmgiri Feet) and prayed to Lord Shiva to grant him Ganga. Pleased with his devotion, he ordered the Ganges river to come down to earth. The river flowing from the Brahmagiri hill was also trapped by a sage named Gautama, called Kushavarta. Then, the sage requested Lord Shiva to reside there. Accepting his request, Prabhu changed into Linga to stay there. 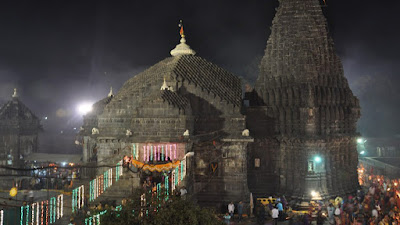 The Trimbakeshwar temple in Nashik opens at 6 am for the devotees to visit and closes at 9 pm. Various types of poojas and aartis are performed throughout the day in this temple. We are going to tell you about some main pooja (special pooja) to be done in Trimbakeshwar temple.

This puja is performed to get rid of chronic diseases and a healthy life. Mahamrityunjaya Puja at Trimbakeshwar Temple takes place between 7 am and 9 am.This abhishek is done with panchamrit i.e. milk, ghee, honey, curd and sugar. Many mantras and shlokas are also recited during this period. It is also performed between 7:00 and 9:00 p.m. This consecration is done to solve health and money problems. It also removes the evil effects of planets in the horoscope. In this puja, the Rigveda, Samaveda, Yajurveda and Atharvaveda are recited in the temple. This puja is performed to improve the condition of Rahu and Ketu. People suffering from Kaal Sarp Dosh are worshiped under the names Anant Kalsarp, Kulik Kalsarp, Shankhapan Kalsarp, Vasuki Kalsarp, Maha Padma Kalsarp and Takshak Kaal Sarp. This puja is performed to avoid Pitru Dosh and the curse of the ancestors on the family. 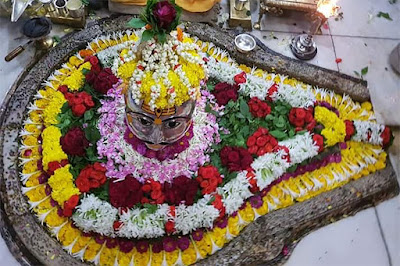 The best time to visit Trimbakeshwar Jyotirlinga Nashik is October to March as the winters are mild in these months. This is the peak season for travelers. During this time, everything is expensive here and the crowd is also very high. However, if you have a low budget, then the monsoon season is suitable for you. You can come here from July to September. Apart from this, devotees visit this temple throughout the year so you can plan to visit here whenever you get time.

BY AIR
There is no airport in Trimbakeshwar and the nearest airport is Nashik. Gandhinagar Airport is 31 km from here and is well connected to Mumbai. From Nashik Airport you can reach here by hiring a taxi to Trimbakeshwar.

BY ROAD
Trimbakeshwar is well connected to Pune and Mumbai by road. You can reach Trimbakeshwar from Nasik, Mumbai cities by state transport buses, luxury buses or taxis.