India Gate, (originally called the All India War Memorial), is a huge 73 meter high site located on the Rajpath of New Delhi. It is the national monument of independent India, formerly called Kingsway. It was designed by Sir Edward Lutyens. The monument is inspired by the Arc de Triomphe in Paris. It was built in 1931. Originally known as the All India War Memorial, this monument was built by the British rulers to commemorate the 900,000 Indian soldiers who were martyred in the First World War and the Afghan Wars by enlisting in the British Army. The names of 13,300 soldiers, including some soldiers and officers of the United Kingdom, are engraved on the gate. This monument, made of red and yellow sandstone, is worth visiting. 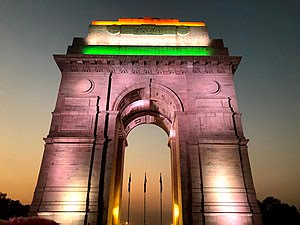 When India Gate was ready, a statue of George V was placed in front of it. Which was later installed in the Coronation Park along with other sculptures from the time of the British Raj. Now, instead of the statue of George V, only one umbrella is left as a symbol. 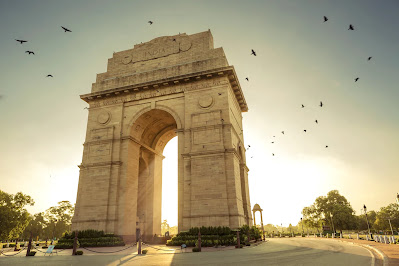 After India's independence, India Gate has become the site of the tomb of unknown soldiers of the Indian Army. The Amar Jawan Jyoti has been installed under its arch. In the memory of the unnamed soldiers, the soldier's cap is decorated over a rifle, on which there is always a flame burning on all the four corners. Every year on this Amar Jawan Jyoti, the Prime Minister and the three Chiefs of the army pay floral cycles and pay their respects.

There are several important routes through the 42 meter high India Gate. Earlier, a lot of traffic passed through India Gate. But now it has been closed for heavy vehicles. In the evening when the memorial is published, a large crowd of people gather in the grasslands around India Gate and on both sides of Rajpath. The hexagonal area of India Gate, situated at a diameter of 625 meters, is spread over an area of 30,000,000 square meters. 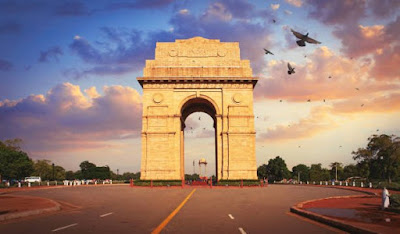 The umbrella located in front of the India Gate is still intact. Once upon a time there was a grand statue of George V under this umbrella. After India became independent, the government removed the idol from there and installed it in Coronation Park. Every year the parade on Republic Day starts from Rashtrapati Bhavan and passes through India Gate to the Red Fort.

HOW TO REACH
The best comfortable option to reach India Gate is via metro. The nearest Metro Station is the Central Secretariat.Other metro stations are  Race Course Pragati Maidan, and Barakhamba. You can get an auto-rickshaw or taxi from outside the metro station to reach India Gate.  You can also take the DTC bus from any point in the Delhi city.