The Victoria Memorial is a British carpet memorial located in Kolkata city in the Indian state of West Bengal. This monument, built between 1906 and 1921, is dedicated to the then Queen Victoria of England. This monument has a beautiful blend of diverse crafts. Its Mughal style domes reflect the influence of Saracenic and Renaissance styles. There is also a magnificent museum inside this building where more than 3,000 other objects including the Queen's Piano and Study Desk are displayed. It opens daily from Tuesday to Sunday from ten in the morning to four in the evening, it is closed on Mondays. 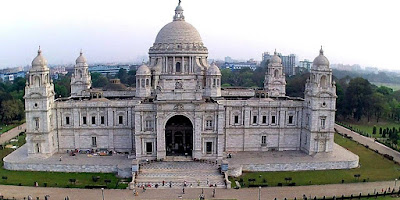 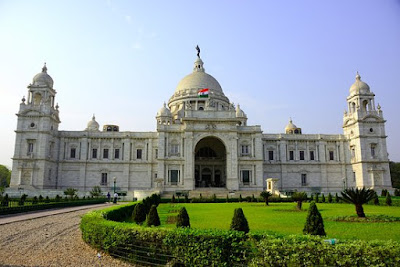 The architect of the Katoria Memorial was William Emerson (1843–1924) who was president of the Royal Institute of British Architects. The design is in the Indo-Saracenic Revivalist style, using a mixture of British and Mughal elements with Venetian, Egyptian, Deccani and Islamic architectural influences. Buildings 338–228 ft (103 m 69 m) and 184 ft (56) Meter) are high. It is constructed from white Makrana marble. The gardens at Victoria Memorial were designed by Lord Reddale and David Penn. Emerson's assistant Vincent Jerome Ash designed the northern aspect bridge and garden gates. In 1902 Emerson teamed up with Ash to sketch his original design for the Victoria Memorial. After designing the temporary exhibition building for the 1903 Delhi Durbar, Lord Curzon found Ash to be a suitable assistant for immersion. 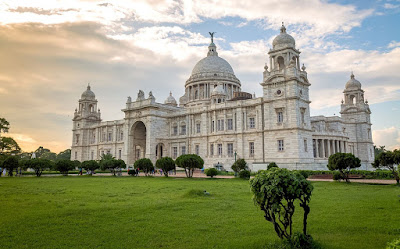 Above the central dome of the Victoria Memorial is a statue of the Goddess of Victory (Angel of Victory), which is 16 feet (4.9 m) in length. There are other sculptures around the dome which display a sculptural resemblance to art, architecture, justice, charity, motherhood, discretion and education. The Victoria Memorial is made of white Makrana marble. In design it echoes the design style of the Taj Mahal with its main domes, four supporting domes, octagonal domed umbrellas, tall portals, roofs and vaulted corner towers.

The Victoria Memorial has 25 picture galleries. These include the Royal Gallery, National Leaders' Gallery, Portrait Gallery, Central Hall, Sculpture Gallery, Weapons and Arsenal Gallery, and the New Calcutta Gallery. The Victoria Memorial includes Thomas Daniel (1749–1840) and his nephew William Daniel (1769–1837). The largest single collection of works. It also has a collection of rare and archaic books such as illustrated representations of the works of William Shakespeare, the Rubaiyat of Alif Laila and Omar Khayyam, as well as books about Kathak dance and Thumri music of Nawab Wajid Ali Shah. 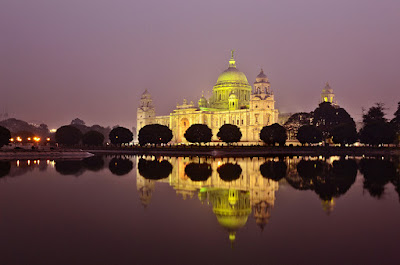 The Victoria Memorial gardens span 64 acres (260,000 m²). It is maintained by a team of 21 gardeners. The garden was designed by Redesdale and David Penn. The building is surrounded by paved posts and commemorative statues of Warren Hastings, Lord Cornwallis, Robert Clive, Arthur Wellesley and Lord Dalhousie. Along with these are statues of Lord William Bentick (1833–1835), Ripon (1880–84) and Rajendra Nath Mookerjee, Governor-General of India in the garden.

HOW TO REACH
You can visit the  Victoria Memorial by taxi, bus or an auto rickshaw. If going by metro, Maidan and Rabindra Sadan Metro stations are the nearest ones.